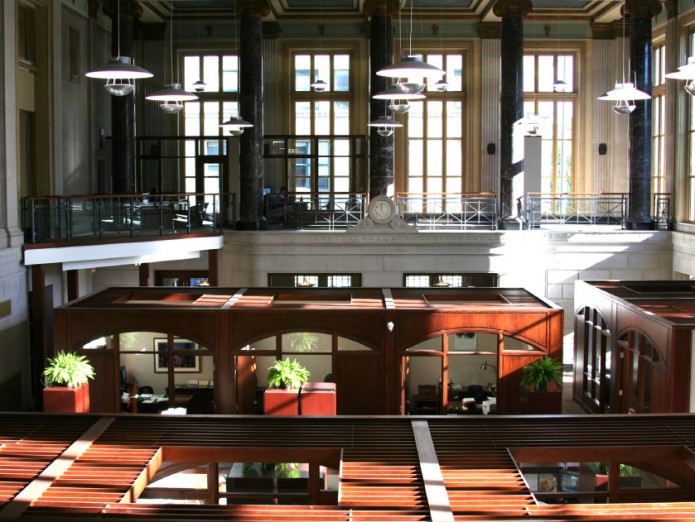 In a new video produced by Hamilton’s Economic Development Office, the restoration and preservation of a former Bank of Montreal building is shown to be one of many success stories in the flourishing downtown of Hamilton, Ontario. Built in 1929 in the Beaux-Arts style, the heritage-designated building housed varied tenants before being bought by Gowlings to become their permanent office in Hamilton.

“The building had incredible bones – it’s one of the greatest examples of 1920’s architecture that I can think of,” said Mark Tamminga, a partner with Gowlings. “We ended up with one of the most remarkable buildings in Southern Ontario.”

The project, a renovation and addition performed by Ira McDonald Construction on a construction management basis, entailed a complete restoration and replacement of the electrical and mechanical systems, a replacement of the building’s glazing systems, as well as stonework maintenance, extensive millwork, and furnishing work. The renovation won an Award of Excellence in Heritage Conservation at the City of Hamilton Urban Design & Architecture awards in 2005.

As a general contractor and construction manager with over seven decades of history in Hamilton, Ira McDonald Construction is proud to have had many opportunities to contribute to the built environment of an Ambitious City with a very bright future.